21.5 Municipal Library of Prague, theme FREEDOM, gesture VICTORIA I am attracted by the idea of creating absurd cycled physical activities in the context of this exhibition, where I am and am not part of the exhibition, but my actions or activity are dependent on other people/visitors who relieve me by taking over my activity, like a baton. And then they must wait for their liberator… This was difficult to realize, because I would not have my liberator, there were no visitors when I was in the gallery. It was a time when a lot of people preferred to be outdoors. I will try this next time, ideally a variant in three phases, outdoor, indoor and space, which connects the outside and the inside. A Game with the Gallery Attendant – one on one. I am in space and I am being watched by the attendant, who at first keeps up with me and keeps a safe distance. When I change my regular rhythm, it causes confusion for the attendant. She almost runs into me when I stop unexpectedly and examine the object from a different perspective. Now I’m starting to focus more on the attendant than on the exhibited objects. At one point, our roles change and I “should follow” her. Probably because a small obstacle has been installed on the ground – laid cotton. She will accompany me back to the cash register, expecting that I will leave, but I will decide to walk through the space again. So, the attendant rises from her chair and follows me again. Now I’m just focusing on her, playing with the pace of walking and watching her reactions.

24.5 Team brainstorming over coffee (Markéta, Zuzana, Míša and Katarína) Our main common theme is “THE CITY AS A MUSEUM”, a walk led through the city where we can look up – see the sights up there as well. Find another way to walk through the city – different or specific physical activity. We are talking about migration – artificial versus classical or rather socio-political. This idea is motivated by Míša and resonates a lot with me in the context of my childhood, as I grew up on the Royal Way. It is, or rather was, my favourite street, which has since become a cheap attraction, a caricature of the past with elements that appeal to tourists – trinkets, sweets, fish that nibble on people’s toes, a museum of torture instruments and other nonsense that simply does not belong here. This also naturally leads to the fact that these streets are mostly used by tourists and the locals avoid them and look for alternative routes. So my big question, or rather the challenge in the context of this project, is – can we do it – and there are two options: the first is to divert the flow of tourists from the Royal Way, at least on some days, in a playful and nonviolent way, to barricade, or create some kind of attraction, which will naturally free up the space of this path. Option two: make a so-called module with simple rules, and with the help of volunteers guide people in a different way along this route (see our walk through the city, cross Charles Bridge with eyes closed together in a row, permit walking on all fours, etc.). An important additional note, which I think Nina and I came up with, is that all the venues of the Prague City Gallery are more or less along the Royal Way from Náměstí republiky (Powder Tower) to Prague Castle.

Playing with the word EXPOSITION:
Exposition / Ex – position /
Exposition: presentation of museum collections, dose of radiation, exposure time in film or photography, introductory presentation of characters or themes, orientation of rugged terrain with respect to light and sun, degree of effect on the living organism, enclosure where animals are exposed and visitors can observe them
Ex – from, out, up, inside, former
Position – location, posture
Ex-position – change the position of the body, reverse the way of thinking, from the inside out …
And with the prefix “RE“: RE – restoration, redefinition, reinterpretation, reminiscence, relaxation, reputation, retraining, relevance, replica, relation. Me and my sister, who is a restorer – how to restore my painting, or a painting about me and in me? Live restoration.

24.5 WITH NINA We named THREE basic phases together: The gallery as an inner space / outdoor public space / a place that connects indoor and outdoor space. How to attract people to the museum? How to attract attention in the exterior? How to become a “rat catcher”? To dance the Royal Way, which connects the Prague City Gallery venues. How to convince people at the entrance to the gallery to come inside?

28.5 Villa Bílek I am here alone. I came unannounced, and I am in the role of a regular visitor. I am warned that photography is not allowed in the area. There is one attendant, he lets me be, I am looking for a place where and how to make an object out of myself. About five hours later, a lady from the ticket desk comes with a duster before closing time; she completely forgot that I was still in the gallery. I managed to blend in with the environment and create an object out of myself that was almost dusted. Sculptures – Bílek (notes from Nina) – when there are no visitors, the only way to give them another experience is to create something like a photo-film collection “at night when children sleep, puppets/sculptures come to life”.

30.5 a walk through the city… … a walk through the city, differently, along the route that lines the venues of the Prague City Gallery. There were no rules at the beginning, everything was defined during the process and along the way. There were six of us at the beginning and only five at the end, we were only women, and one was lost during the journey. In Karlova Street and on Charles Bridge, we defined one rule – to contrast with the crowd of tourists, their noise and power. In Charles Street – slowly walking backwards with arms outstretched, we went alone and/or in a row of six people holding hands crossing the Charles Bridge with eyes closed / or crossing the bridge with closed eyes one-by-one – partial interaction of passers-by. This last phase (Charles Street and Charles Bridge) was liberating in a way; until then one felt that one must either draw attention to oneself or somehow “fight the energy of tourists, which is mostly perceived negatively from the point of view of the local population.” And this moment naturally created space and dialogue; passing tourists themselves needed to comment on what they saw, to ask us what we were doing, if we didn’t need something, or maybe to join us or just accept us. Actually, an interesting experience, which I would like to follow up on.

31.5 Bílek’s Villa from the perspective of children I have three children (ages 4, 9, 11), we are already announced for the exhibition together. We look, we talk, we measure our bodies with the bodies of the statues, we think about the names of the statues, we try to understand their story and look for what was before and what could be after… We rename the statues, we try to make similar bodies out of our bodies, then we started to get bored. Dominik came and started filming us, but the children were a little embarrassed. In conclusion: The question still remains, how to proceed? To adapt to today’s trend – a general tendency – to leave the established space – theatre or gallery? Why? Or, conversely, to restore the original meaning to these institutions, and to remain inside? What is an institution? Focus – viewer and visitor. What is the difference between exhibiting in a theatre and exhibiting in a gallery? Or connect everything and do one big tour through the city with six stops? Something needs to change… end of the first part. 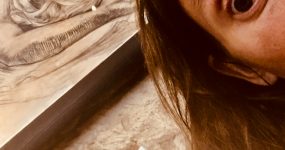 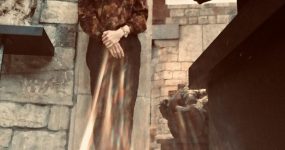 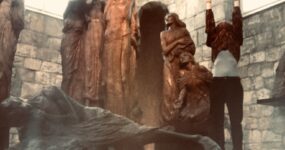